Norton is one of the most well-known names in the cybersecurity arena and is older than most other companies that muscle for rank in a very crowded industry. Chances are that you’ve already heard about Norton, unless you’ve been living under a rock. And if you’ve used Norton in decades past, you may have an inaccurate impression of its products.

Back in the mid to late 2000s, Norton, though still extremely successful, garnered a reputation for drastically slowing down computers. But computer salesmen at common electronics retailers like Circuit City and its blue and yellow competitor would tell you that it was worth poor performance during a scan, because it was so thorough, and that the alternative was risking getting a virus.

Those days are long past, and Norton, along with every other competitor in the industry, intentionally designs its antivirus solutions to have as small an impact on system performance as possible. Norton AntiVirus Plus 2021
$19.99
Check Price
We earn a commission if you click this link and make a purchase at no additional cost to you. Norton 360 Standard 2021
$3.50
Check Price
We earn a commission if you click this link and make a purchase at no additional cost to you. Norton 360 Deluxe
$34.99
Check Price
We earn a commission if you click this link and make a purchase at no additional cost to you. Norton 360 Premium
$29.99
Check Price
We earn a commission if you click this link and make a purchase at no additional cost to you.

Norton has pricing that’s a little cheaper than the average provider. And at first glance, you may be tempted to spring for the Basic version due to its extremely low price tag. But don’t be seduced by the pricing model just yet, because you also need to take into account what features are provided with each different level of service.

That makes it a great option if you need an antivirus solution right away to deal with an existing infection, especially if you’re not sure whether or not you want to commit to a subscription just yet.

These prices are easily justified by the features, as we’ll discuss shortly. Also, note that these prices are even below the cost of the average provider in the industry. Even the Premium plan provides good value in my opinion and comes loaded with a ton of extras. I would caution you to not be seduced by the Basic plan, however. Sure, it may be cheap, but you get what you pay for. 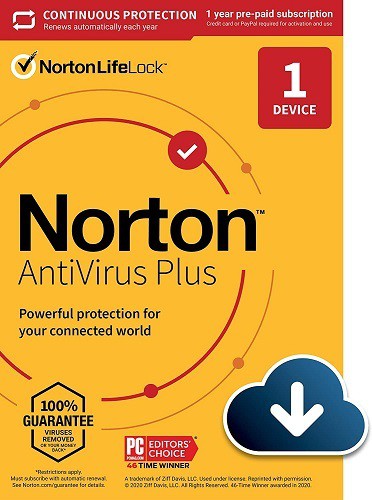 Norton separates its antivirus features into four distinct different packages: Basic, Standard, Deluxe, and Premium. The Basic version is aptly named, and will only protect a single PC.

The main difference between the three packages is the number of protection features that are provided.  Some of the top features include:

While it’s core feature is little more than virus scanning and malware removal, I was surprised to see that even the Basic version included identity theft protection and online transaction security. Still, I don’t think I’d ever buy the Basic plan. The biggest thing it lacks, in my opinion, is a virus-free guarantee.

The Standard plan includes all of the features of the Basic plan but adds more functionality. I think that the Standard plan is the bare minimum I would recommend. Thankfully, it comes with a 100% virus free guarantee, which entitles you to a refund if Norton can’t get rid of your virus.

In addition, it even comes with customer support, which could be a godsend when a nasty virus has overtaken your PC. It even comes with a smart firewall, which I don’t think I personally see a lot of value in, but it’s better than nothing. Next is the Deluxe plan. It doesn’t really add a whole lot of extra functionality. The main benefit is its inclusion of enough licenses to be used on up to five devices. The developers also created a web portal to help you track and manage the security of all your devices, too.

Last up is the Premium plan, and it includes some features that stray away from the core value of virus protection. Nevertheless, I think the extra features are invaluable tools, such as the password manager, backup features, and the 25 GB of cloud storage.

In all honesty, I already have a third-party password manager, but too many users fail to utilize password manager apps. So, it’s handy that Norton has thrown one in with the Premium subscription. Norton, which is owned by Symantec, performed admirably in the independent lab benchmark tests. To see how well antivirus solutions stack up against each other, av-tests ran the industry’s top providers through rigorous tests designed to objectively measure the level of impact the software has on a system.

Furthermore, the tests also help quantify how many false positives an antivirus application raised, as well as its efficacy in warding of viruses in both a lab test and a real-world threat protection test.

Before we dig into the nitty-gritty details, however, please understand that there’s no such thing as a perfect antivirus solution. There are pros and cons to each service. Take false positives, for example.

No one likes it when their antivirus app generates a false positive, but the alternative is using software with somewhat laxer standards regarding what constitutes a virus, which could let a threat slip through the nets.

At any rate, the following data was produced from independent benchmark tests from av-tests: Please note that in the data, it is not listed as “Norton.” Rather, it is listed as Symantec, which is the owner of the Norton brand.

Pros and Cons of Norton

Norton AntiVirus has an overall rating of being an excellent PC protection program.  However, here are a few pros and cons to help you make an informed decision.

Overall, I was very impressed with Norton’s updated antivirus solutions. In fact, there are only two things about this service that I don’t like. Firstly, I didn’t like the functionality and features of the Basic plan. It may be dirt cheap, but it doesn’t really offer good value. Secondly, I don’t like the fact that Norton throws more false positives than the average provider.

That’s something that needs to be accepted, however, because it’s better to err on the side of caution. Other than those two factors, I think Norton is an excellent solution that will help ward off cyber attacks and digital threats effectively – and at a fair price.

Last but not least, if you’re still on the fence, then I highly recommend downloading the free trial to see if you like it. It’s worth testing it out at least because you have nothing to lose!

Norton AntiVirus Plus 2021
$19.99
Check Price
We earn a commission if you click this link and make a purchase at no additional cost to you.

Norton 360 Standard 2021
$3.50
Check Price
We earn a commission if you click this link and make a purchase at no additional cost to you.

Norton 360 Deluxe
$34.99
Check Price
We earn a commission if you click this link and make a purchase at no additional cost to you.

Norton 360 Premium
$29.99
Check Price
We earn a commission if you click this link and make a purchase at no additional cost to you.

how to infuse loose leaf tea with cbd

Its pretty interesting that the mainstream media has changed the way it looks at this recently dont you think? Now it seems that it is discussed thoroughly and more in depth. Overall though Im looking for a change.

Magnificent beat ! I wish to apprentice while you amend your web site, how can i subscribe for a blog site? The account helped me a acceptable deal. I had been a little bit acquainted of this your broadcast offered bright clear idea Hope Keven Merle

Thank you ever so for you post. Really thank you! Awesome. Audi Aguie Egan