Hitman Pro vs Malwarebytes [2021]: Which is Better?

If you’re like most people, you’ve experienced the throes of contracting a virus on your computer. The instant you realize that you caught the latest bug, virus, malware, ransomware, or other variety, you probably went into panic mode and felt a fearsome rush of adrenaline.

The main differences between Hitman Pro and Malwarebytes are:

That feeling is awful because you start to wonder whether someone has stolen your identity or personal files, such as personal photos or work data.

The next step isn’t always easy, either. You wonder which antivirus solution you should use, or whether or not it’s worth it to run down to your local PC repair shop, which charges exorbitant fees without a guarantee of virus removal.

If you’ve been in this situation, then you understand the value of anti-virus software. The good news is that by and large, the vast majority of viruses and exploits are completely avoidable.

To be fair, there will always be a newly minted and highly sophisticated virus that can slip through the cracks and infect your system. After all, there’s no such thing as an infallible computing system. But this is the exception and not the rule.

Bottom Line Up Front: While I love some of the advanced paid features on Hitman Pro, if you want the best VALUE for your money, most users are better served by the lower cost paid tiers (and even free plan) offered by Malwarebytes here. There IS such a thing as antivirus overkill, and Malwarebytes still offers the best protection, for the best price, with the lowest drag on system performance.

As long as you’re diligent about personal data security, you can easily circumvent the pain and anxiety that a virus induces. But which provider should you choose? Is one better than another? How far can you stretch your dollar to get the best deal?

I aim to help you answer those questions by comparing two of the industry’s leading providers: Hitman Pro and Malwarebytes. Understand that the antivirus and antimalware industry has tens, perhaps hundreds of competitors.

However, some self-proclaimed antivirus applications are really just another attempt by hackers to get you to download a file that contains a virus. If you’ve received ads from sketchy third-party services that you’ve never heard of, I’d advise against downloading their solution…even if it is free.

There are only a handful of competent and trustworthy providers that can offer you real protection, and Hitman Pro and Malwarebytes are among the best. So, let’s start picking these two providers apart to help you reach an informed decision, starting with their respective pricing models.

Before we dig into the details of the paid subscriptions, be aware that both providers have a free trial that allows you to test out the software before making a commitment. While the free trials aren’t really appropriate for long-term use, I always advocate the use of a free trial over nothing at all.

Too many folks get viruses because they failed to use anti-virus programs, so remember than some protection is better than no protection at all.

For reference, the following outlines the pricing model of Hitamn Pro:

The Malwarebytes pricing plan is as follows:

Alternatively, note that the paid version of Malwarebytes (for 1 device) costs $39.99 (check here for the latest price & discounts). You can also signup for the Home Plan for $59.99 which protects up to 5 devices. Note: Malwarebytes also has “business plans” for larger coverage options.

However, it isn’t a lifetime license. Instead, that price only covers a one year subscription.

As you can see, Hitman Pro has a lot more payment options, though they aren’t as granular as I would like. Still, if you only need to secure a single PC, Hitman Pro is cheaper than the standard Malwarebytes subscription.

Even though Malwarebytes has a free trial, it is rather limited in features and the vast majority of features only last for two weeks (14 days). The free version comes with very basic and limited antivirus protection, though it does help identify, detect, and remove malware and spyware from your computer.

In addition, it has anti-rootkit features to help eliminate invisible background processes that can take over your host system. All other features (mentioned later) expire after the 14-day window has elapsed.

If you’re English isn’t that good, chances are you’re covered since it supports a wide range of the most popular languages. Computer jargon and virus lingo are cryptic enough, and the last thing anyone needs is an additional layer of language barriers. Moving on, note that the paid version doesn’t have features that expire after 14 days.

Those features are as follows:

“The easiest way to protect your computer from most of the malware is to use this application.

Malwarebytes Anti-Malware is user-friendly program with nice and simple design. Its impact on your system performance is minimal, though it enables real-time protection by monitoring all the applications’ and files’ behavior.

“Yes, there is no doubt that Malwarebytes is one of the most surprising anti-malware software as compared to other anti-malware and yes it is safe to use on multiple OS such as Android, Windows, Mac.

There are two versions of malwarbytes available (Free & Premium) to use. In free version you can avail manual scanning option for auto scanning and other good features (active protection, planned scanning & memory scanning option) you need to upgrade for the premium version.” Michael Justin, Quora

Also, it only supports Windows systems dating as far back as Windows XP. So if you’re a Mac or Linux user, you’ll need to look for an alternative to these two providers to secure your system.

The interface is extremely basic and user-friendly and was designed to make the virus scanning and malware removal process as simple and painless as possible. After you fire up the software, there’s a single “Next” button to click to start a scan.

It doesn’t seem to have as many features as Malwarebytes, and its main focus is running a simple yet powerful scan. After it has found threats, it ranks them by a level of severity and allows you to delete, ignore, or quarantine the suspicious files. It does come in both 32 and 64-bit versions and is delivered via the cloud.

But past malware detection and removal and manual scans, there’s not a lot of other features – which could be a good thing, depending on the type of user you are. Malwarebytes is simple enough to use, but the Hitman Pro interface is even more minimalistic and easy to use.

I wouldn’t say either provider has a cluttered interface, but Hitman Pro makes things simple by containing all the settings in a menu accessed with a single click. Other than that, all you need to do to complete a scan is hit the “Next” button.

How can I remove a Miner from my PC?

“If you think your machine is infected with a crypto mining malware, download the free version of Malwarebytes and run a scan.

Regardless of scan results, get another superb program for free called HitmanPro and scan your PC again.

By running those two powerful anti-malware programs, you will most likely eradicate any crypto miners present on your computer.

P.S. HitmanPro is free to use to get rid of malware from your PC for the period of 30 days after removing the first threat from your PC.

N.B. The free version of Malwarebytes and HitmanPro are on demand scanners, so you can safely use both of them alongside your existing antivirus product.” Robert Smitins, Quora 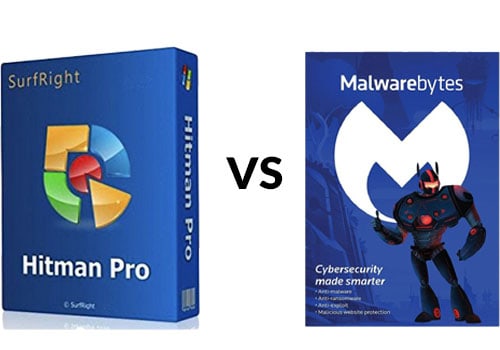 This is a really tough call because both of these pieces of software are brilliant. In the end, however, I have to go with Malwarebytes, because it is perhaps the best free utility to remove a virus. Though the free trial isn’t appropriate for long-term protection, it can really help you out of a bind if you suspect that your system has become infected.

On the other hand, Hitman Pro has extremely attractive pricing and long-term subscription options that offer better savings.

I really doubt that even someone who is technologically illiterate would have a problem with using either service. But if you’re intimidated by information technology and computers in general, Hitman Pro might be slightly easier to use.

Bottom Line: I’d put my trust in Malwarebytes, but you’re free to disagree. If you’re still not sure, I encourage you to download Malwarebytes’ free trial to see what potential viruses may be lurking in the background of your computer.