Online backup solutions are a necessity in today’s world. We are growing ever increasingly dependent on computers and mobile devices, and in this day and age, we need protection.

Computers are like any other machine, and eventually they break down. Even though there have been leaps and strides in storage technology, such as solid state drives, mechanical failure is only one thing that could go wrong.

Not to sound like a pessimist, but there are a million and one ways to lose data including accidental deletion, hard drive failure, viruses, malware, ransomware, and accidentally overwriting a file.

If you’ve ever lost critical data (family photos, a final project, your thesis, or work documents), you know that it feels worse than being punched in the gut. You get a terrible sinking feeling in the pit of your stomach once you finally concede that your data is gone forever.

Anyone who’s experienced that terrible feeling in the past usually learns their lesson, and backs up their data zealously as a result. But how do you know which cloud backup provider (online backup) to trust your data with?

There are almost too many to count. Fortunately, today we’re going to compare two of the leading services, Carbonite and Mozy Backup, to help you form and educated decision. Let’s start off by looking at their pricing model and range of products.

In a Hurry? Here’s my Bottom Line Up Front: I went with the Carbonite plan here because it offered unlimited storage, more useful features, and a better base price.

Today we’ll be focusing on the home versions of cloud backup solutions. However, keep in mind that Mozy is a Dell technology product, so they naturally focus on providing corporate and enterprise-grade solutions. I was pleased to see that the MozyHome pricing model was simple and affordable, as follows:

These rates are pretty common in the cloud backup industry. It’s safe to say that there are many providers who will charge an arm and a leg, though I thought Mozy was pretty darn reasonable. For comparison, the following outlines Carbonite’s pricing model:

As you can see, Carbonite offers comparable pricing options, though we are comparing apples to oranges a bit here, because the online backup and data security features between these two services vary widely.

Although, the Prime version of Carbonite is only $2.50 more per month, which I think most people would agree is fairly insignificant. 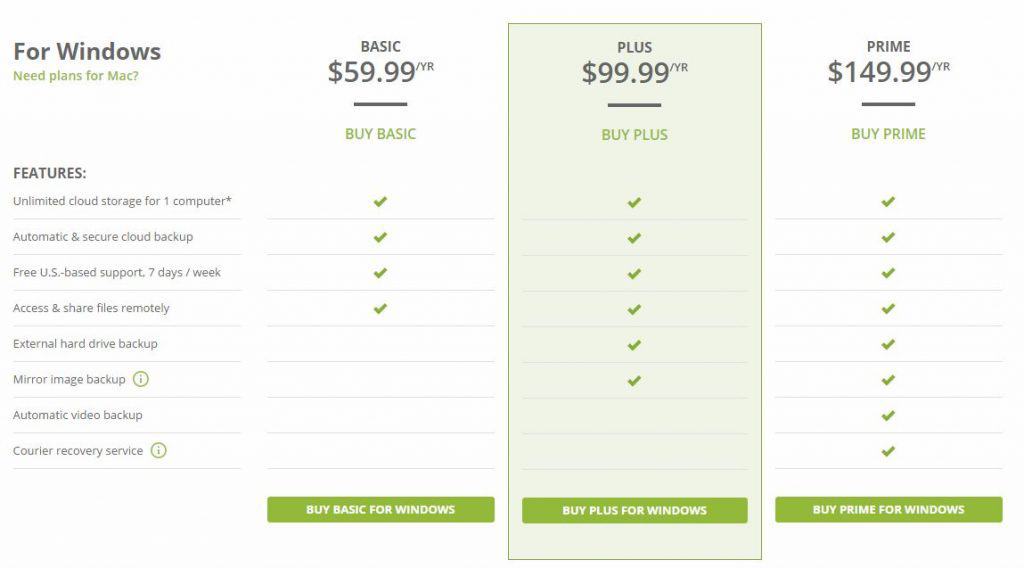 For the sake of pricing alone, it seems that the Carbonite Basic plan offers more value to users who are only backing up a single system. In addition to costing a dollar less per month, it also provides unlimited storage space. 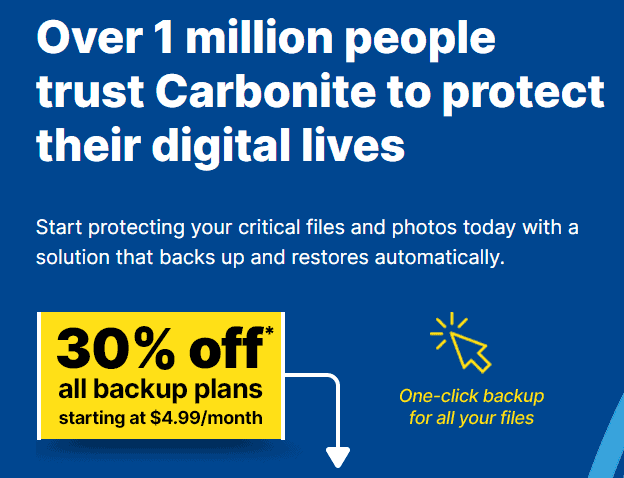 The features are a little more nuanced for Carbonite than they are for Mozy. Part of Carbonite’s pricing strategy is to sort different features into different service levels. So, let’s start with the Basic Carbonite package.

The Basic package is, of course, the most watered down version of the Carbonite backup service.

It does include free US-based support and unlimited storage and unlimited backup. And the software does include automatic backup features, as well as the ability to access and share files remotely. But past that, it doesn’t do much more than basic backups. In fact, it can’t even backup an external HDD image.

Next is the Plus plan, which includes only a couple more features, including the ability to backup external HDD’s.

The best thing about the Plus plan, in my opinion, is the ability to create an image of a hard drive. This means you can create a “restore point” for your PC, which even backs up the operating system. This makes it possible to recover from a virus by reverting to an earlier point in time.

Lastly is the Prime service, which includes all of the previous backup service features, but adds two more.

The first additional feature automatically backs up video files. But for me, the real advantage of the Prime plan is the courier recovery service. They’ll actually send you hard copies of your data, which can be a real life saver. Furthermore, I found it odd that only the Basic service is available on Windows and Mac. The Plus and Prime subscriptions are only available on Windows.

MozyHome has some pretty comparable features as well, starting with their automatic backups.

They claim that MozyHome is 100% automated, but I don’t find that to be true. You do have some manual control over the backup process if you wish. In addition, they provide access to your backed up files from all the major platforms, including mobile operating systems like iOS and Android. You can even restore files from the web interface.

There’s also an easy one-click restore button that simplifies the process. Furthermore, you can even download all of your backed up large files with one easy click. It seems that they’ve tried to make their software extremely user-friendly by simplifying the restore process. Also, I was moderately pleased to see that they include 90-day file versioning backups. Some providers don’t have this feature at all; although, some providers provide unlimited file versioning. Still, 90 days is better than nothing.

And I was interested in their 2XProtect feature, which is something I haven’t seen with other providers. The 2XProtect feature works by making a duplicate backup service to a local storage medium, like an external hard drive, simultaneously with a cloud backup. That way you have a redundant local copy of your data in addition to the data stored in the cloud (virtual data center).

Last but not least, MozyHome includes a syncing feature. This feature works in the same way as many other popular syncing services, such as Dropbox. It uses the concept of a “syncing folder,” and anything placed in that folder gets automatically synced to all your other devices.

I actually found that both Mozy and Carbonite are pretty evenly matched when it comes to security, because they both use the concept of a user-managed encryption key and local encryption (also called client-side encryption). This means that your data will be encrypted on your local machine before ever leaving your computer and traversing the public Internet.

Furthermore, your backup data will remain in an encrypted format while sitting on either service’s storage servers. To be fair, the local encryption can slow down file transfer times. If the data isn’t sensitive or consequential, you have the option of not using local encryption. In that case, your data will be encrypted using transport encryption, and is then encrypted once more for online storage.

However, I’d advise that you always use local encryption (local backup) unless you are 100% positive that the data isn’t personal or sensitive. For instance, I wouldn’t use client-side private encryption to secure file backups of my movie collection, because I couldn’t care less if an attacker gets their hands on such archived treasures as The Princess Bride or Jurassic Park. Personal family documents like digital wedding photo backups, however, are a completely different story.

Final Thoughts on the Carbonite vs Mozy App Battle

So which service emerges victorious? I have to say that it was a reasonably close competition, but I like Carbonite a lot more than Mozy for several reasons. First of all, the pricing plans are pretty similar, though it’s a bit like comparing apples to oranges. Carbonite has the cheapest plan, though their Plus plan is about the same price as the multi-user MozyHome plan.

So, I’d say it’s a wash on the pricing factor. However, I really didn’t like how Mozy places restrictions on the amount of data you can store in the cloud. 50GB will fill up pretty quickly these days, so that’s one enormous reason to opt for Carbonite (they have unlimited storage).

Also, I think Carbonite had better features. Again, this is nuanced because it depends on which plan you select.

If you’re worried about the fact that Carbonite only allows backups for 1 PC, then simply use a way to circumvent that fact. You could either manually transfer files onto the PC that has backup capabilities, or use a syncing service before backing up files from other computers.

Lastly, I think its a wash between their security features, too, since they both offer extremely strong client-side encryption. Bottom line, both are more secure that a Dropbox type solution.

In summary, the following are reasons why I liked Carbonite better than Mozy:

Didn’t Find What You are Looking For?

You can also check out a variety of other backup reviews and comparison that we’ve published: