The Ultimate UnblockUs Review You Need to Read!

UnblockUs VPN is another competitor in the VPN space, though their service is different than most. The devil is always in the details, and I was disappointed with what I discovered. They market their service as a “SmartVPN,” which I feel is extremely misleading. You see, their “VPN” tunnel doesn’t actually provide any security through encryption.

Don’t get me wrong; that in and of itself doesn’t mean that they’re a poor service. Instead, it means that their service is limited to specific applications and scenarios, making them less robust than a traditional VPN.

Nevertheless, I tend to dislike and distrust services that disguise, hide, or trick users. Calling their service a “VPN” is incredibly misleading because they really function more like SmartDNS proxy services.

We’ll dig into the dirty details of how their servers function in the features and security sections, but first we need to take a look at their pricing model. 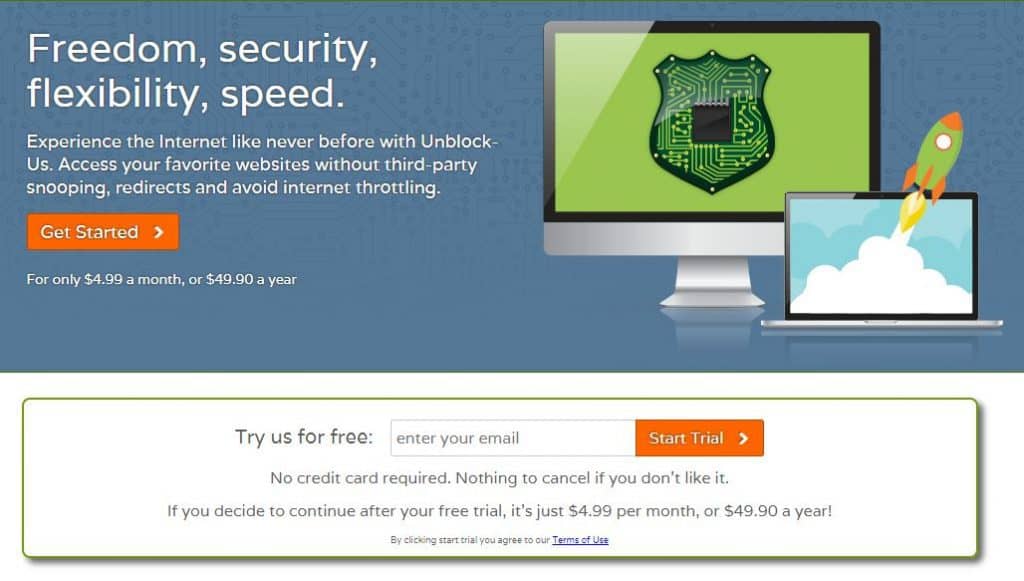 Right off the bat, I was pleased to see that they offered a very favorable free trial. The free trial only lasts a week, but otherwise doesn’t have any limitations like data caps or bandwidth throttling. But that wasn’t what pleased me the most. It’s common for digital services to require payment card information before a user can sign up for a free trial, and I bet you know why.

If the user forgets to cancel their service before the end of the trial period, they get automatically billed. The good news is that UnblockUs doesn’t require payment card information, and all you need to supply is your email address to test out their service. If you decide to purchase their service, you’ll only pay $4.99 per month, or $49.90 per year ($4.16 per month) (check here for the latest price & discounts).

All in all, they are a lot cheaper than most other VPN services. Though as a point of contention, I feel that you can get better value from an inexpensive VPN provider. For instance, realize that PIA VPN only costs $3.33 per month (check here for the latest price & discounts) with an annual subscription, and there are a fair few other VPN providers in the same price range.

We’ll talk about some of the technical advantages of UnblockUs later (especially related to encryption), but understand that you can get a more secure service for the same price, or even a little less. With that said, let’s take a look at their features. 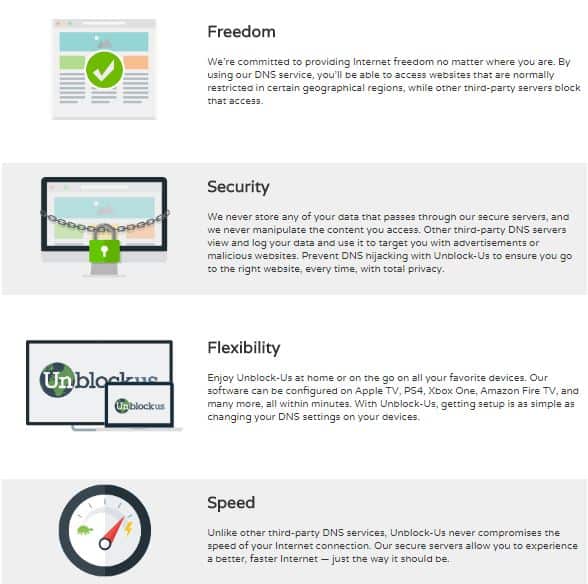 Your data doesn’t take the most direct route to its final destination since it must first be routed through their “VPN” servers. Still, it’s going to be slightly faster than a VPN tunnel, which makes it an ideal choice for users who simply wish to unblock geo-restricted content.

But I must advise people from accessing censored web content in hostile countries and countries with harsh punishments and Internet laws. Since there isn’t any encryption, a governmental agency or ISP could see that you are accessing illegal content, and come knocking on your door.

However, if you’re just trying to connect to a foreign game server or access Netflix abroad, UnblockUs is an ideal choice. It’s worth noting, however, that a proper VPN tunnel (like PIA VPN) will still provide the same functionality.

They do support all the major operating systems, too, including Mac OSX, Windows, iPhone, iPod, iPad, and Android. But all in all, their service doesn’t have nearly as many features as a traditional VPN service. Part of me thinks that they were able to save money by not adding as many features, which is one reason why they’re so inexpensive.

To put things bluntly, this service provider is in no way secure. Remember, even though they call it a “SmartVPN,” it doesn’t encrypt data like a regular VPN tunnel would. Instead, it acts more like a proxy service. As your data is sent to their server, it is in an unencrypted format. Furthermore, the data is left in an unencrypted format as the server forwards your data to the correct destination host.

For this reason, I have to advise people to refrain from sending sensitive data through their servers. On a happier note, they don’t log user activities or user data. Nevertheless, a rogue employee or hacker could potentially see your data, since it hasn’t been encrypted. The only real advantage from a security perspective is a nominal increase in privacy.

You see, their server acts as a middleman, which hides your real IP address. In addition to masking your IP address, it can spoof your geographic location. So web servers on the other side of their VPN servers won’t be able to see which computer is making a request and where the data originated from. This makes UnblockUs a good tool for unblocking geo-restricted content.

Lastly, note that they don’t claim anywhere in their privacy policy to collect logs of user accounts or IP addresses. That surprised me because it’s typical for these types of services to log bandwidth statistics, IP addresses, and similar information in order to plan for future capacity.

So, to summarize, their security is awful because they don’t provide encryption, though they do mask your IP address and keep next to no logs. 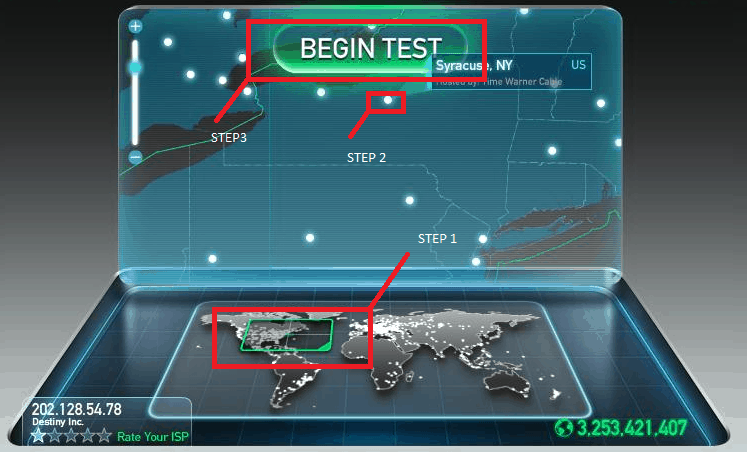 They did claim to be a lot faster than a VPN tunnel, which makes sense because their isn’t any encryption overhead. However, depending on which server you connect to, there could be significant latency (latency is partly affected by geographic distance). But for better clarity, quantification, and comparison, the following list the results of a speed test:

I honestly have to say, I was pleasantly surprised. Their service was indeed significantly faster than my VPN provider. In addition to lower latency than my VPN provider, I retained approximately 1Mbps of my download speed. The upload speeds were pretty dismal, but for the sake of unblocking geo-restricted streaming content, it’s the download speed you’ll be most concerned with.

Furthermore, I ran a ping to Google’s DNS servers and found that response times were fast and steady. Testing on YouTube, I didn’t notice any buffer errors. I was able to stream content from Hulu, which was surprising because Hulu is notorious for blocking VPN and proxy servers’ IP addresses.

I was able to browse the web just fine, and as far as I could tell, there wasn’t any performance impact. On the whole, I was pleased with the speed of their service, and I’d give them an A+.

When I first heard about this service, I think I was a little predisposed to dislike them. But after the speed test, I started to warm up to them. The truth is that they are a low-cost alternative with great speeds that will help users unblock geo-restricted content. And to be fair, they are less expensive than some services like ExpressVPN, which costs about $8.32 per month with an annual subscription.

Personally speaking, however, I’d never use this service. The biggest drawback is the lack of encryption, and I couldn’t browse the web with the peace of mind that my data was secured. Plus, since there are plenty of true VPN services that offer encryption and cost the same (or even less) than UnblockUs, I just can’t justify paying for their “SmartVPN” service.

Why not save money and take advantage of enhanced security through encryption? Most VPN services will have comparable or adequate speeds, save for a rare few exceptions.

I’m not sure I’d recommend this service unless you were looking for a short-term solution to unblock restricted content while traveling because you could use the free trial. In my humble opinion, I’d refer others to PIA VPN, since they cost as little as $3.33 per month and secure your data with strong encryption protocols.