Wireless routers were not created equally. Some offer great value and an inexpensive cost, some offer the absolute latest technology at a high price point, and some are flat out lemons. It’s tough keeping up with technology because it’s constantly changing and evolving, too. Trying to find a quality wireless router can be a nightmare due to the seemingly endless flood of new models with cryptic names that are difficult to remember.

Today we’re going to be comparing router models from two popular household names, Asus and Linksys. Asustek owns ASUS, and Linksys was sold to Belkin by Cisco Systems back in 2013. But which brand has the superior product, and which one provides more value?

To help you make the most informed choice before buying hardware, today we’re going to take a look at two top wireless router models: the ASUS RT AC68U vs. Linksys WRT1900AC. Let’s get started by analyzing each competitor’s price.

With exception to geeks, techies, and hardcore gamers, I think the price is likely the most important factor the average consumer because most people generally aren’t very attached to their router. For that reason, I wanted to perform a pricing comparison first. The price of each model is as follows:

First off, please be aware that the prices listed above are for brand new models. You can, of course, find cheaper used or refurbished versions for much less. Also, if you’re simply looking for the cheapest option between the two, then the Linksys model is obviously cheaper. However, I would advise you to read on through the hardware comparison, because the amount of money you can save by opting for the cheaper alternative is negligible. 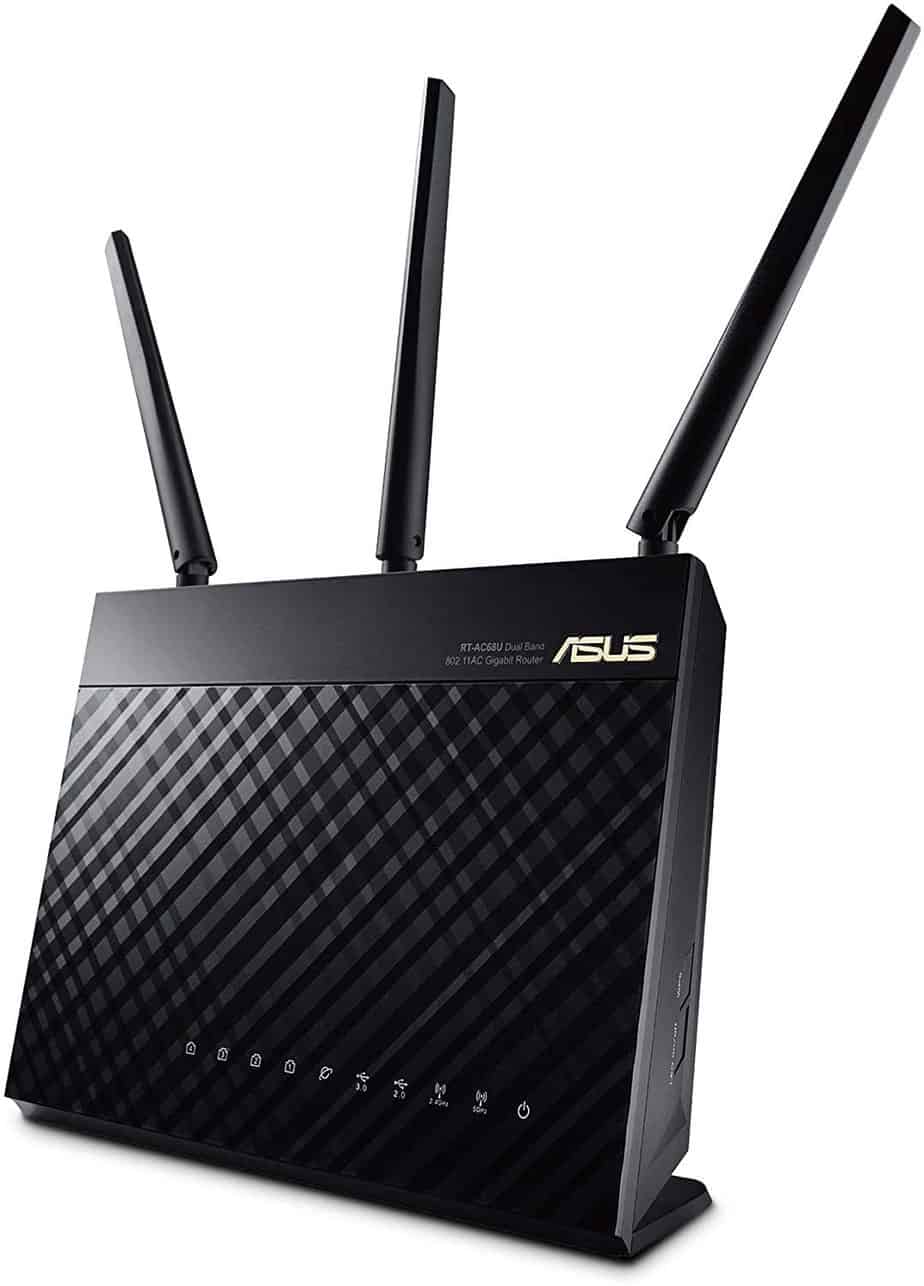 I personally don’t think saving $15 is significant, especially when considering that most people are going to continue using their router for years on end. I think the average person uses a single router for at least three years, with exception to technology enthusiasts who always want the latest and greatest hardware.

When you think of it as an investment that’s going to last 3-6 years, saving $15 doesn’t seem important to me. Nevertheless, some people are extremely conscious about price and want the absolute cheapest solution possible.

The physical shape is also important because it determines where it will be placed in a home or office. Some people think wireless routers look so hideous that they will stuff them in a cabinet, which dampens the wireless range and slows down the signal. Remember, the closer a device is to the router with an unimpeded line of sight, generally speaking, the faster the connection will be.

In summary, with regards to the shape of the device, the ASUS model looks one heck of a lot better but has one fewer antenna than the Linksys model.

Now it’s time to dig into the technical specifications of the hardware. Each model actually has a surprising amount of features in common. In fact, I think think the most significant differences between these models are their respective CPU speeds, the quantity of Gigabit Ethernet ports, and the features contained on the firmware. 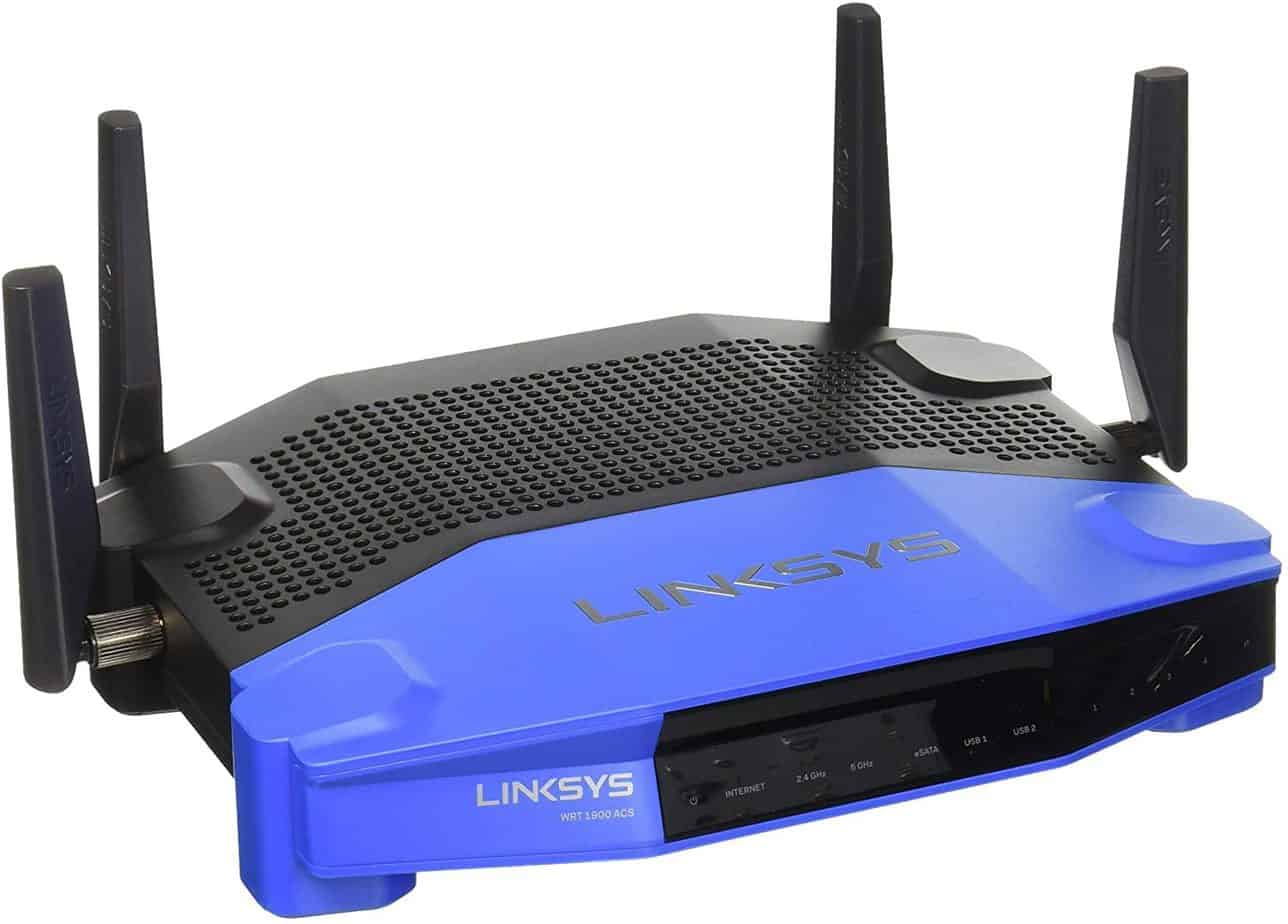 Each router is up to date with the latest and greatest wireless technology, which is IEEE 802.11AC. Naturally, both routers are backward compatible with older versions of wireless standards (A/G/N, etc.), so your older devices will still be able to connect over a wireless connection, albeit at the speed of the slower wireless protocol. Also, be aware that the 1,900 Mbps theoretical maximum throughput only accounts for the wireless portion of the routers.

In addition to wireless throughput, each router also comes equipped with Gigabit Ethernet ports, which are each capable of simultaneous sending and receiving data (full duplex) at 1,000 Mbps, and are usually faster than the wireless.

The 802.11AC standard is frequently quoted as being 1.3 Gbps fast, but yet again, in reality, you’re never going to see speeds that fast on a single connection because of signal attenuation, obstructions, distance from the router, and other similar factors.

The following outlines the hardware specifications of the Linksys router: Linksys WRT1900ACS Wireless Router
$89.00
Check Price
We earn a commission if you click this link and make a purchase at no additional cost to you.

The following outlines the hardware specifications of the ASUS router: ASUS AC1900 Router (RT-AC68U)
$129.99
Check Price
We earn a commission if you click this link and make a purchase at no additional cost to you.

So, what does it all boil down to? I think both models have admirable hardware features and the latest wireless standards. I also think that the ASUS model has some great firmware features, such as Trend Micro security. But in the end, I have to award the hardware victory to the Links WRT1900AC. While the Linksys model does have one fewer Ethernet port than the ASUS model, it has one additional external antenna, a processor that’s 0.6 GHz faster, and twice the amount of RAM.

To top it all off, even though it has better raw processing power and memory, it’s still $15 cheaper than the ASUS model, which seems backwards to me. I would have expected the Linksys model to cost more on account of it superior hardware.

Both routers offer a maximum wireless throughput of 1,900 Mbps, which is an astounding 1.9 Gigabits per second. However, I do want to take a moment explain that figure, because it’s technically the theoretical maximum throughput of the wireless technology. In reality, it’s unlikely that you’ll ever come close to pushing that much data through the device.

The maximum throughput figure simply means that the router can (theoretically, mind you) send traffic locally among all connected devices on the wireless LAN at 1,900 Mbps.

If you have an Internet connection that’s only 5 Mbps, buying the Linksys WRT1900AC or the ASUS RT AC68U isn’t going to “supercharge” your Internet connection. You WAN bandwidth will remain at 5 Mbps and will act as a bottleneck. Now, that doesn’t mean that aren’t benefits buying either router, especially over the LAN.

If you haven’t upgraded your wireless router in four years, five years, or even longer than that, you will likely notice massive improvements over your LAN data. For instance, communications with a storage server or NAS drive will be able to take advantage of the increased speeds, as would other forms of local network traffic.

Overall, I think I have to award the victory to the Linksys WRT1900AC, for some simple and obvious reasons. First of all, it’s obviously cheaper, which I said wouldn’t be an important determining factor given that you only save $15 when opting for the Linksys model over the Asus one. However, it has significantly better hardware, a processor that’s clocked 0.6 GHz faster than the Asus model’s processor, and twice as much memory.

I may not be crazy about the way it looks, but it does have an extra external antenna. To sum things up, with the Linksys model you get significantly stronger and faster hardware at a cheaper price. It was close, but the victory goes to Linksys.

[…] routers have some common features, but the differences come in when you look at their respective CPU speeds, features contained in the firmware, and the number of gigabits in the Ethernet ports. Asus rt ac68u router […]