Spybot vs Malwarebytes – Which Antimalware Wins?

How well do you know antivirus and antimalware providers?

If you’re like most people, you’ve likely heard some of the big names in the industry, like Norton, AVG, Spybot, and Malwarebytes anti virus scanning programs and software. However, if you’re like most people, you have no idea which provider scan tool will actually protect your system from malicious elements and which provider might accidentally let one virus slip through the cracks.

It’s 2017, and the Internet is littered with more viruses and malware than ever before. Using a computer without antimalware software is like walking into a war zone without a bulletproof vest.

I don’t mean to paint an ugly picture of the modern Internet, but it is the world in which we live. The ugly truth is that there are hoards of hackers and viruses out there, just waiting for a chance to infect your system and steal your identity or files.

That’s why I always encourage people to take advantage of free versions of antivirus programs and antimalware software. Ideally, they would use the full-featured versions that require subscriptions, but some people are willing to take that risk.

At any rate, I want to help you make an informed decision between two popular choices of antivirus and antimalware protection: Spybot and Malwarebytes programs to avoid an infected system.

I think Malwarebytes antivirus protection software is the more popular of the two programs, though plenty of people have heard of Spybot anti virus as well. To kick things off, let’s start by looking at their pricing plans.

Both providers are fairly cheap, especially when compared to other competitors in the industry. And I should mention that both antivirus protection providers include free versions of their products, though they are bare-bones and don’t include as many features as the paid versions. The Home version of Spybot anti-virus software is a lifetime subscription, and only costs $13.99, which is pretty darn cheap by most people’s standards.

For comparison, note that the Pro version of Malwarebytes anti-virus software only costs $39.99 for a 1-year subscription. While that may seem like a massive price difference (and it is) Malwarebytes still isn’t the most expensive malware removal provider that I’ve seen. And as we’ll see in the following sections, you clearly get what you pay for. 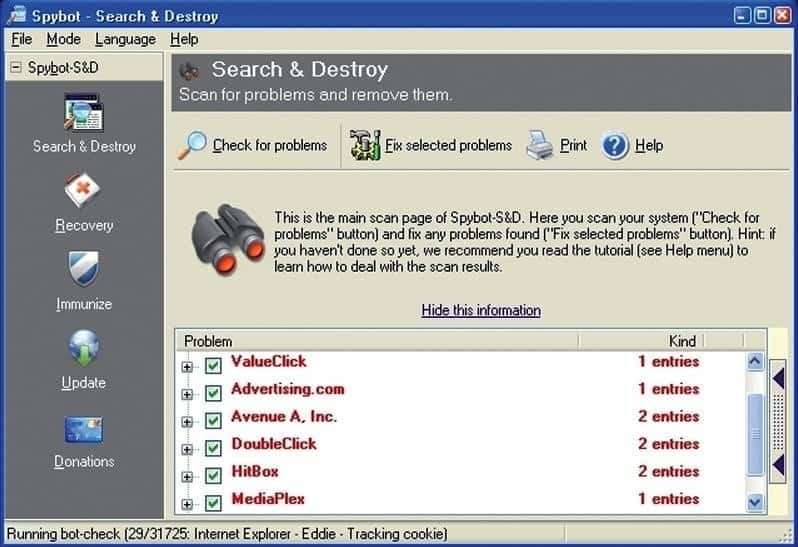 The first impression I got from Spybot tool wasn’t a good one. The website looks incredibly outdated, or perhaps it was just poorly designed. It was difficult finding the information I was looking for, but moving forward, I’ll focus on the quality of their features.

“As opposed to other antimalware competitors, Spybot really only has tools that are designed to identify and remove malware, without the extra features, addons, and goodies.”

They do have a free scanning version, though the only two features they listed on it are “anti-malware” and “anti-spyware.” There aren’t any additional features like social media security, secure online payments, or real-time protection. But to be fair, those features are usually (but not always) included in Internet security packages.

And the Home version isn’t really that much of an improvement over the free version. In fact, there are only three minor improvements. The first of which is the ability to automate scans.

This is a big deal because it doesn’t have real-time threat detection. Though the free version may be a good tool if you’ve already contracted a virus, you would need the upgraded version for practical protection against malware.

Otherwise, a virus could easily sneak in between scans. Furthermore, the Home helps automate the update process. That’s a really big deal with antimalware software because the service is constantly pushing out updates regarding the latest and greatest threats. Without the automatic update feature, you could fail to adequately protect yourself against the latest viruses and malware.

And the third main improvement with the Home version is the addition of technical support. If you are unfortunate enough to get a virus, having technical support on your side can be a huge asset – especially if you don’t know what you are doing.

They can help guide you through the process of safely quarantining and destroying the virus, though the software is simple enough I think most people could handle that on their own.

And that’s really all there is to the paid Home version. It’s not to fancy, over the top, or extravagant. It’s just a down to Earth antimalware application. 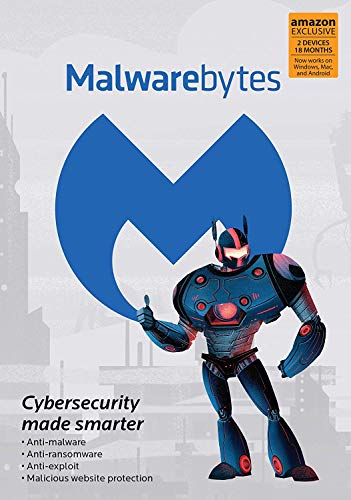 Malwarebytes removal tools, on the other hand, has a much higher quantity of advanced features. It does still have the core features of identifying and remove malware, though, such as viruses, Trojans, keyloggers, ransomware, adware, spyware, and rootkits, and other infected elements.

However, it has one massive advantage over Spybot, and that advantage is real-time protection.

When Malwarebytes anti-virus software is running in the background of your computer, it can actively identify incoming threats, block them, and send you warnings and notifications. For that reason alone, I think everyone should be using Malwarebytes instead of Spybot, but things get even better.

Malwarebytes scan program even comes with browser protection features, that help prevent and block web based threats. Some attackers leverage websites by injecting them with malicious scripts.

Once your browser visits the web page, the hidden script is downloaded and executed in your browser. But Malwarebytes scan program protects against these types of attack.

Furthermore, it even includes features that are designed to stop phishing attempts by preventing you from visiting domains that are already known to be bad or unwanted programs.

Malwarebytes keeps an updated list of the latest and greatest malicious websites, fake pages, and malicious links, and send you a warning before you proceed to one of these sites.

Spybot malware removal program, on the other hand, doesn’t have any feature that even comes close to that level of scanning or malware protection.

Last but not least, Malwarebytes comes with a hyper scanning mode that only looks for active threats. The idea is to have a smaller impact on system performance by only performing a cursory scan.

This is useful if you need to get some work done or save computing resources for another application. It’s so light that it can even be run in the background while you’re playing a video game.

And that’s all there is to Malwarebytes. As you can see, it clearly has a lot better features than the Spybot alternative. Personally, I think that the real-time protection is a massive advantage, so I have to award Malwarebytes the victory in the “features” competition.

Final Thoughts on Malwarebytes vs Spybot

Antivirus and antimalware providers or antivirus programs are often so similar and so close in scanning material, that the determination usually comes down to two different factors.

The first factor is price, since some people only look for the cheapest solution. The second factor, however, is independent lab tests and benchmark tests that quantify the efficacy of any given antimalware provider.

That said, this competition wasn’t close enough to warrant discussion of tradeoffs between price and functionality. In my opinion, Malwarebytes is hands down the clear winner, and I doubt many of you would argue with me.

There seems to be no question that Malwarebytes has superior features, and can thus provider your system with better protection.

To be completely honest, I wasn’t too impressed with Spybot, and I thought it’s interface was awful. I would strongly caution people from using it just because it is the cheapest solution.

As the old saying goes, you get what you pay for. I know that some of you may not want to purchase Malwarebytes since it is almost $40 for a 1-year subscription, but you can get better discounts with 2-year subscriptions.

Bottom Line: So, to sum things up, I much prefer Malwarebytes to Spybot, even though the prices are so far apart. As a final reminder, make sure that you use a free version of antivirus software if you don’t currently have any, because you never know when a virus could infect your computer.