Small businesses often meet a multitude of challenges. From launching a business, struggling to find leads, spending time on an advertising campaign, or trying to manage I.T. resources, small business owners are up to their necks in challenges. And finding the right hardware doesn’t make things any easier.

Small businesses seem to be in a bit of a gray area – a no man’s land where small office and home office routers just don’t cut it, while exorbitantly expensive enterprise-grade equipment simply isn’t in the budget.

So where do you begin looking for small business routers?

It’s a given that almost every small business these days needs to be connected to the Internet.

Though some try to get by with their smartphone plans, serious small business owners know they need to maximize every dollar of the I.T. budget by finding the perfect router for their business. And whether you knew it or not, many small businesses have a dire need for security technologies, such as VPN tunnels, that aren’t included on common consumer routers.

So, let’s take a closer look at the best routers for small businesses in 2017.

Keep in mind that this isn’t a comprehensive list, and depending on your needs, you may need a more powerful or more consumer-grade router.

However, these are the best options for small businesses that need more than something they can find at Wal-Mart, while still spending significantly less than they’d find from a vendor.

This model is like the previous Cisco model in that it isn’t really suitable for home use, but it isn’t the best option for large scale businesses (with exception to remote sites) either. 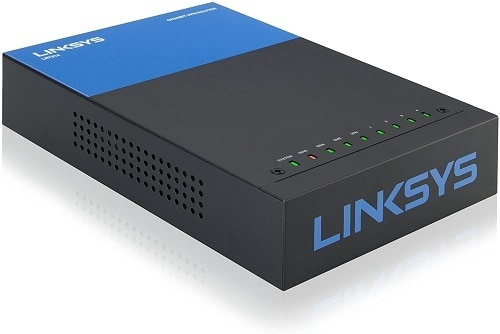 Instead, it’s more appropriate for small businesses, and this model also has the ability to terminate VPN connections. In fact, it comes with a license that lets it terminate up to 50 different IPsec tunnels, regardless of whether they are client VPNs or site-to-site VPNs.

In addition, it can support up to 5 OpenVPN tunnels as well that help to secure users on mobile devices like Android and iOS. And as you might expect, since it’s a business-class router, it includes Gigabit Ethernet connections for extremely fast throughput and connections to other networking devices.

Advanced features include firewall capabilities, network segmentation with VLANs, and QoS. There are two different versions of this product as well, with the only difference being an extra WAN port for redundancy.

Cisco keeps popping up on this list, and for good reason. Though come competitors may also make products targeted at small business (like Juniper and Dell), Cisco is known for superior products, and the RV320K9NA is no exception.

This model is loaded with extra security features. Naturally, this model still has the ability to terminate and negotiate VPN tunnels using several different connection protocols.

But I really like how it comes with stateful packet inspection features so the firewall can make extremely intelligent decisions about what actions to take on highly specific types of traffic.

It can also perform hardware level encryption, which offloads the processing overhead. This model does have support for Gigabit Ethernet as well, and it even comes with 2 USB ports. The USB ports can be used to connect flash drives to flash the firmware or even connect modems to.

Cisco is an obvious choice for businesses of any size, though they make most of their revenue for corporate-class devices. That said, they do still create high quality models that are suitable for small businesses. 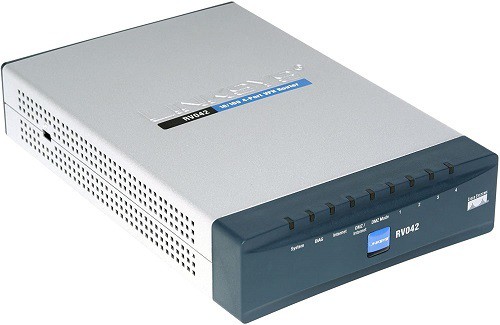 The  RV042G-NA is one of the higher quality and feature packed models on the market. It’s a little too much hardware for a home user – even hardcore techies and gamers – though it would make sense in a small business environment.

It includes two Gigabit WAN ports for ISP redundancy, which is a necessity in some business environments. It also comes jam packed with advanced firewall features, DHCP, NAT, and advanced security features.

This model seems to be somewhere between a small office/home office router and an enterprise-class router. Naturally, it has the processing capacity and software resources to establish VPN connections. 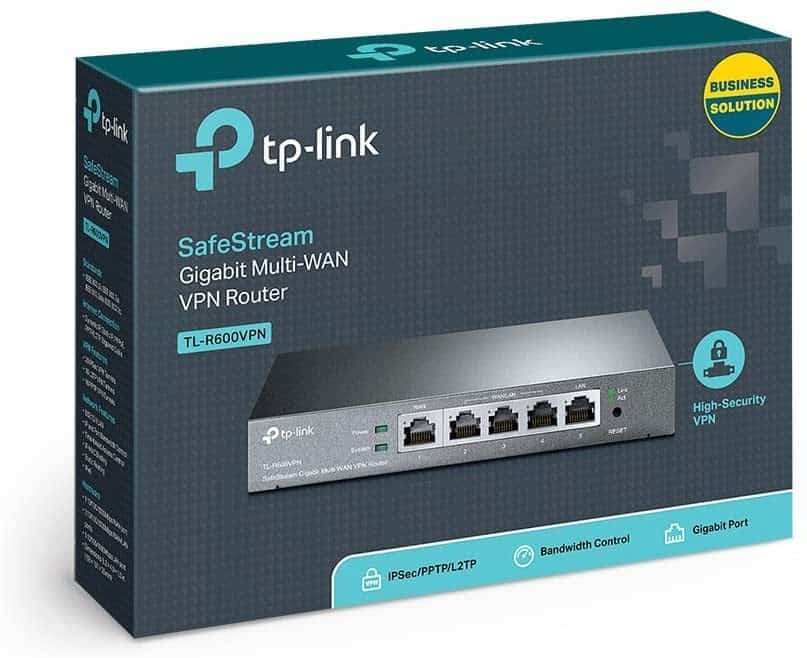 Though it doesn’t support as many encrypted tunnels as some of the previous models mentioned, it does still allow up to 20 concurrent IPsec tunnels as well as 16 simultaneous tunnels using PPTP. However, as a side note, you shouldn’t ever secure sensitive small business data transmissions with PPTP since it is insecure.

Plus, the router does come with some security enhancements that are far superior to features you would find in a common small office/home office router. In addition to hacking signatures and DoS protection, it comes with a beefy surge protector. Last but not least, note that all 5 ports are Gigabit, including the WAN port and all 4 LAN ports.

The  TL-ER604W is yet another powerful yet affordable VPN router (compared to medium and large business solutions) that allows you to host several Wi-Fi networks at the same time. 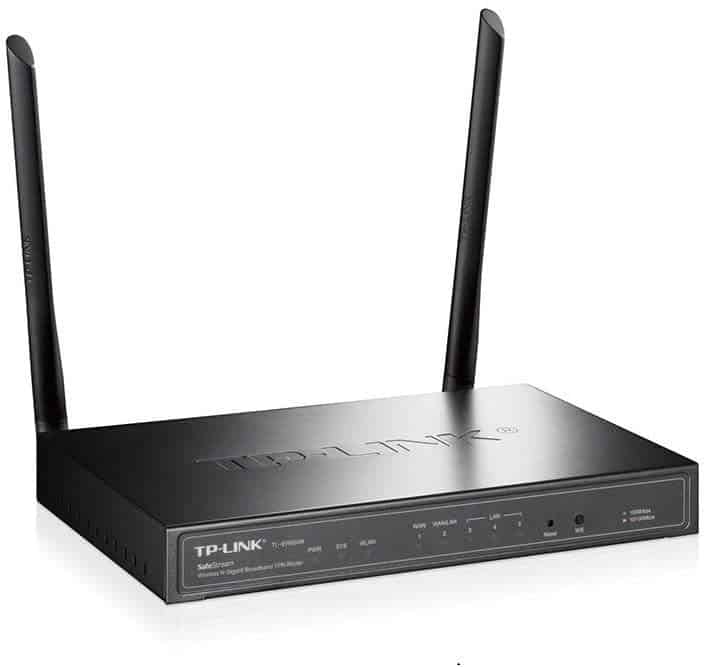 This is extremely advantageous for segmenting network traffic. For instance, if you had a computer on the local network that maintained a customer database, you would probably want that on a separate VLAN than customers who come in and enjoy free (and secure) Wi-Fi.

However, this model doesn’t support the latest 802.11ac standard, and instead only supports wireless-n. But it does come with great firewall features that will allow you to restrict domains and limit services, such as Bittorrent downloads, instant messaging, and video streaming (which will help keep employees focused on their work).

It does come with 4 Gigabit Ethernet ports as well, and can handle heaps of simultaneous VPN connections. In addition to 8 PPTP tunnels (which I dislike tremendously), it also supports up to 8 L2TP and 30 IPsec connections. It too comes with a surge protector, though it doesn’t have a battery backup for fault tolerance.

If none of these models suit your needs, but you still need a more powerful solution than the crummy over-the-counter routers with bad OEM firmware, there is a cheap solution. You can simply purchase a consumer-grade router that supports DD-WRT or Tomato and flash the firmware yourself.

That way you will enjoy all the firmware enhancements of DD-WRT or Tomato, which are far superior to standard router features. This way, at the very least, you’ll have a cheap router that’s capable of terminating a VPN connection. It may not be the most elegant solution, but if you’re in a bind and need a cheap alternative, DD-WRT is the way to go.

NOTE: if you want to learn more about the differences between these two protocols, check out this comparison of DD-WRT vs Tomato.

If you don’t feel comfortable performing the upgrade yourself, feel free to visit FlashRouters. Not only do they sell routers, but they can even perform the upgrade for you. Be warned, however, because it usually costs and extra $50 or so to perform a firmware upgrade.

I absolutely love beefy and high quality networking equipment, and despise the junk that’s sold at popular electronics retailers. Most of the junk that’s sold there isn’t suitable for small businesses, though it is possible to make a high-end model suit your needs with a firmware upgrade.

My final piece of advice would be to avoid picking the cheapest model available. I know that as a small business, your budget is probably pretty tight. But if you plan on hiring more employees as you grow or adding more resources to your network, you’ll be glad you didn’t skimp out on your router. It’s better to think about the future and avoid having to upgrade your equipment in a year or two.

I'm thinking of pairing the TP-link router with NordVPN teams because I had a recommendation from a friend. Would you have any comments?

Good to know about these useful routers specially the cheaper alternatives to consider. Worth reading. I m using purevpn usa vpn service https://www.purevpn.com/servers/usa-vpn and considering to have a router at home.