There has long been a rivalry between PC gamers and console gamers, but whichever you prefer, one thing remains constant if you’re serious: you need top quality network hardware to improve your gaming experience.

Personally, I prefer gaming consoles like the Xbox One for a few reasons.

I know, I know. It’s a lot of fun building your own custom gaming rig. And you can take advantage of the newest superior graphic cards as soon as they come out. But that’s a bit of a double edged sword. While you may not be able to upgrade each and every component in a console (in fact, attempting to do so will usually void the warranty), your custom gaming rig can quickly turn into a money pit, greedily gobbling up your hard earned dollars.

Though you lose a bit of modularity and the ability to upgrade a console, you have a platform that’s guaranteed to be around for several years that won’t require any hardware upgrades. That means that you can spend your money on other things, such as games, accessories, and DLC. Despite the fact that it’s a Microsoft product, I’m still a huge fan of the Xbox line and the Xbox One.

But know that if you’re serious about a good gaming experience, you need more than your average run-of-the-mill wireless router. These days, gaming has moved to the cloud, and most games interact with systems on the Internet at the speed of light. I’m not only referring to multiplayer gaming, either. Some games are hosted in the cloud, and they come with a range of cloud services such as cloud backups.

As such, you need to have a fine-tuned Internet connection and high powered router…or it’s game over.

Even if you don’t play games professionally, there’s nothing more irritating than being trash talked by a competitor who chalks up your lag problems to being a “newb.” So, let’s take a look at the best routers for gaming in 2017. 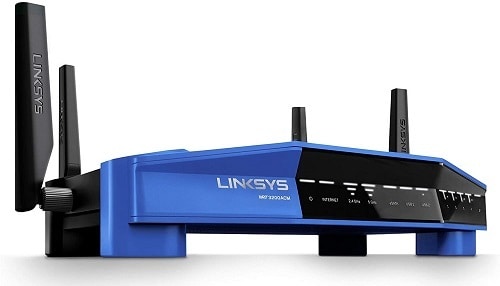 This high powered router model looks a little unsightly due to its four external antennas. But it has a massive wireless range and can support wireless connections from the Xbox One and computers simultaneously without experiencing any throughput issues.

Naturally, it does support the latest Wi-Fi standards such as Wireless-N and Wireless-AC. Oh, and guess what? It supports open source firmware such as DD-WRT to give you even more control over your network with high-end features.

Plus, it’s loaded with hardware. The processor is a dual core CPU, and each core runs at 1.8Ghz. It does include USB 3.0 ports for network storage or as a means of flashing the firmware, and it includes 512MB of RAM and 256MB of flash memory. In addition, it has 4 Gigabit Ethernet ports if you prefer to hardwire your Xbox One to the router.

As a side note, I typically prefer hardwiring my gaming console to the network since it’s more dependable (and usually faster) than Wi-Fi. But there is one important caveat with the Xbox One: you’re probably never going to experience true Gigabit Ethernet speeds.

Just remember that the console needs to make TCP connections with Microsoft servers, which are also bottlenecked by your ISP connection. Still, for local network resources like a NAS storage device, having a Gigabit network interface is still a fantastic feature. At any rate, this is still a great option for gamers. 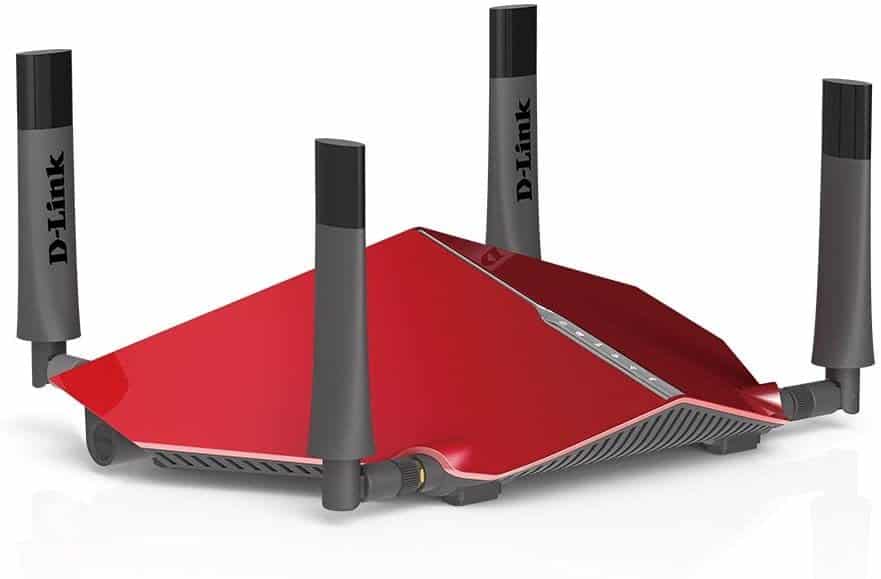 Despite its long and contrived model number, the D-Link DIR-885L/R is another great alternative for gamers who are looking for a mid-range solution. You can get this bad boy for about $250-$300 dollars depending on where you shop, and whether you buy it new.

It’s not really much more attractive than the previous router, though. It has four wireless external antennas as well, so you may want to find a way to conceal it from plain sight.

Still, it’s got some great features. Though I would preferably upgrade the firmware to DD-WRT, the native firmware does come with some great QoS features. If you wanted to (and I hope you do), you can setup Quality of Service parameters that give traffic priority based on it’s source/destination IP address. That means you can prioritize all traffic flowing to/from your Xbox One over other users on the network.

Its processor is a little bit slower than the previous router, too, though still pretty darn fast for a wireless router. The CPU is dual core, and each core runs at 1.4Ghz. Naturally, it does have a USB 3.0 interface for NAS devices and memory sticks.

Plus it has great wireless features, such as MIMO (Multiple Input Multiple Output) and Advanced AC Smartbeam, which is D-Link’s proprietary beamforming implementation. Between its above average hardware and fast wireless speeds, it’s great solution for Xbox One gamers. 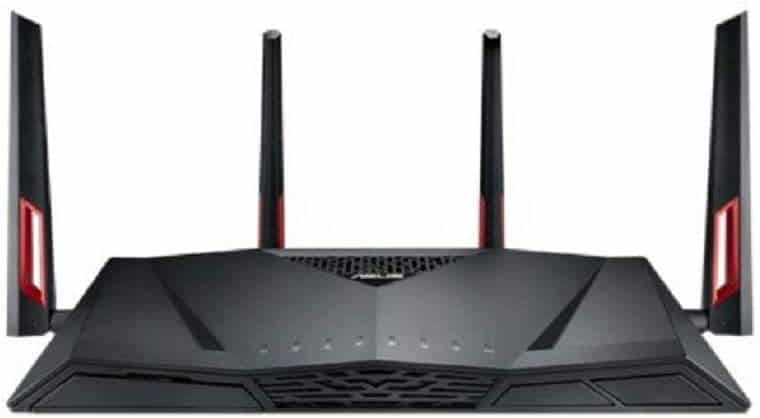 The Asus RT-AC88U is a high powered router that frequently rises to the top of “best-of” lists, and for good reason. It’s simply a fantastic well-rounded router that’s jam packed with top of the line hardware and fast wireless speeds. Between multiple wireless channels, the Asus RT-AC88U can push a total of 3100Mbps throughput.

You should note, however, that it can’t generate that much throughput for a single connection, since devices are still encumbered by the theoretical maximum transmission rate of 802.11ac.

Still, it’s a great option, especially if you have a lot of wireless clients. Most folks don’t use a gaming router solely for gaming, and other users need to access the Wi-Fi for their laptops and mobile devices. Given the immense throughput of this model, the wireless won’t be a bottleneck for your traffic. It’s far more likely that your ISP connection will be the bottleneck.

It also has four external antennas, but it doesn’t look as alien as the previous two routers. It has an eight-port switch on the back too, which is great for gaming across a LAN – though the wireless will be able to support LAN gaming as well. It does come at a price though, and can be purchased for about $300 dollars depending on where you shop. 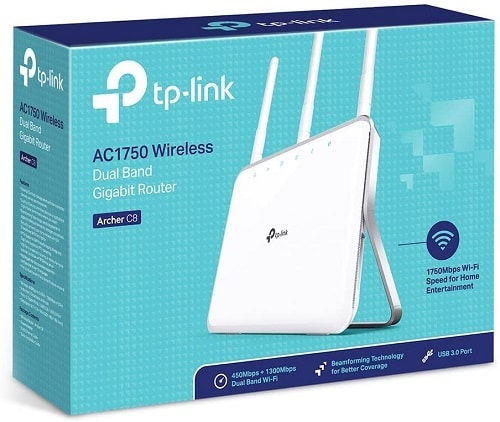 I had to include the TP-Link Archer C7 AC1750 as an honorable mention. The problem with high performing wireless routers is that they can break the bank, so I wanted to include a more budget-friendly option. You can pick it up for about $100, which is about a third of the price of some of the previous option. That’s about the cost of a couple games, so it’s pretty economical.

However, know that you won’t be getting the latest and greatest hardware. That said, it does support the latest wireless standard, 802.11ac. If you don’t have too many wireless clients on your network, you likely won’t notice a large difference in wireless speeds between this model and the previous alternatives. It does support a maximum throughput of 1750 Mbps, which is nothing to sneeze at.

And it does still come with Gigabit Ethernet ports for your Xbox One, as well as QoS options in the firmware and three pairs of antennas for a strong wireless signal (half are internal and have are external. But there are a few drawbacks. The firmware is rather limited, it doesn’t have USB 3.0 ports, and it doesn’t support MU-MIMO. Still, it’s a great economical option. 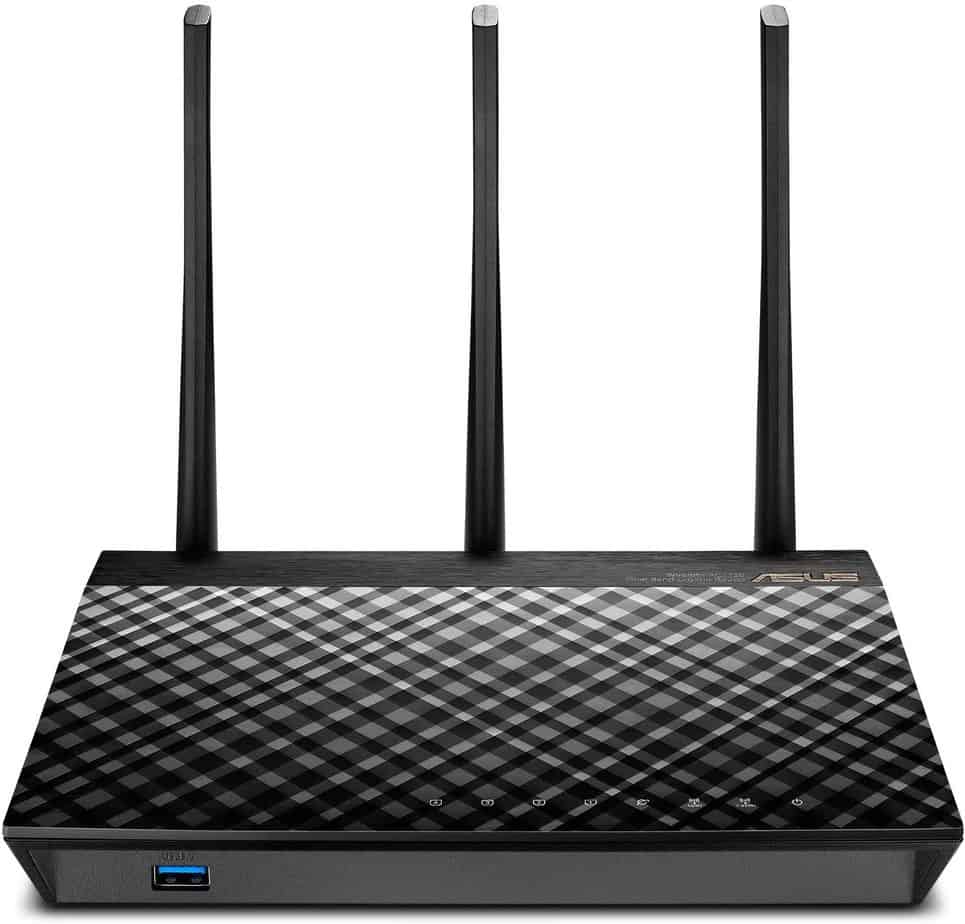 Last but not least is the Asus RT-AC66U, which is similar to the TP Link model. This isn’t a top of the line gaming router either. Instead, it’s really more of an entry level router that still provides fast wireless speeds for the Xbox One. You can find it online for about $130-$150, which is still pretty economical.

Surprisingly, despite its low price point, this model has fairly advanced firmware with a tone of features designed to improve your gaming experience. Also, it has one of the best wireless network ranges in its class, which is critical for providing the Xbox One with a fast and reliable signal. It does of course support 802.11ac and 802.11n too.

However, this model is “on its way out,” so to speak. Asus has come out with several superior router models, and this one is starting to take the path of the dinosaurs. Then why did I include it, you ask?

Well, it’s capable of running Tomato and DD-WRT, and it’s cheap. Basically, if you’re just looking for a simple 802.11ac wireless router that supports firmware and don’t want to pay exorbitant sums of money, this is a great option.

In addition to having fast wireless speeds, I think there are two critical factors that affect your gaming experience. The first is the speed of your upstream ISP connection, which should go without saying. Gigabit ISP connections are becoming more and more common, allowing people to push massive amounts of traffic through their routers without lagging a single millisecond.

Secondly, local network configurations can have a heavy bearing on your gaming experience, especially if a lot of people use the local Wi-Fi. That’s why I highly recommend taking advantage of QoS to protect your gaming traffic. If you want to crush the competition, you need to make sure other users don’t gobble up your limited upstream bandwidth.

Hi, here on the forum guys advised a cool Dating site, be sure to register - you will not REGRET it https://bit.ly/2MpL94b