If you’ve ever had a hard drive fail on you and lost critical data as a result, you’re not alone. We’ve all been there at one time or another. Whether it was a book report for school, a final project, family photos, or a work document, losing your data is nothing short of devastating.

Prudent users always back up their data, and those of us who have felt the pain of losing our files never want to experience that terrible feeling again. That’s one reason why online cloud backup services are booming. It seems that another cloud backups service surfaces with each passing business quarter.

But a smattering of different options, while great for competition and the improvement of cloud services, can be too much of a good thing. It’s hard knowing which providers are good – and which ones stink.

The good news is that today we’re going to be comparing two of the top dogs in the industry to help you find the cloud backup service that’s right for you.

So let’s dig into the pricing options for Backblaze and Crashplan.

If you’re on the fence about either cloud backup provider, then you’ll be pleased to know that both Backblaze and Crashplan offer free trials. However, I was a little disappointed to see that Backblaze only offers a free trial lasting 2 weeks. 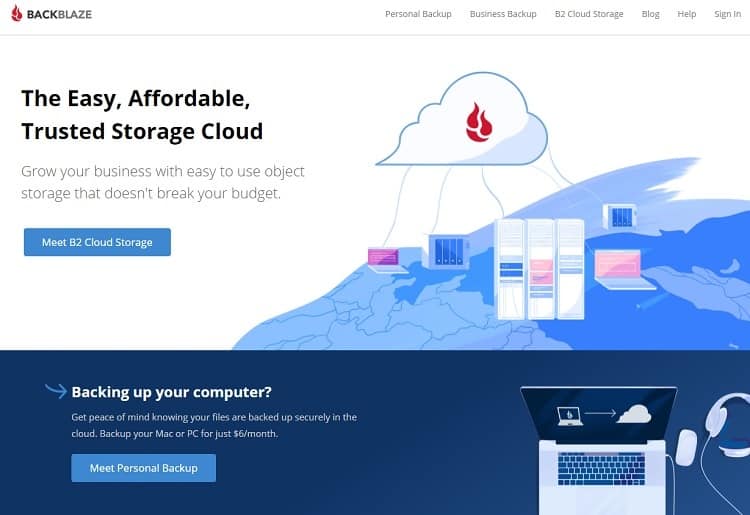 Crashplan gives free users an entire month to test out their service. This is fairly common among various backup providers, but some services, like SpiderOak One, allow users to make unlimited free local backups with the free version of their service indefinitely.

Both providers are pretty fair in my opinion, so let’s dig into the details.

The biggest drawback is that you can’t use the free trial indefinitely. Also, I don’t feel that either service really has a granular payment system. With a lot of cloud and digital services, it’s fairly commonplace to see subscription terms offered on a month to month basis and every 3, 6, and 12 months.

Crashplan and Backblaze, apart from a monthly subscription, only have annual subscriptions.

And as you can see, Backblaze is clearly cheaper. To match Backblaze’s monthly price, you’d need to opt for the annual subscription with Crashplan. Having said that, there isn’t really a wide margin between their prices.

At most, you’re going to be saving a buck a month (or $12 annually) depending on which plan you choose.

In my opinion, that’s insignificant – about the price of a cheap, greasy burger from a fast food chain. Unless you’re very sensitive to price, you’ll likely be more interested in the features that each provider offers.

First off, I’d like to note that the free version of Crashplan only allows you to make local backups. But the free trial does offer you online storage space. One thing I really like about their service is that they don’t limit the amount of online storage space in the cloud like some services, such as SpiderOak One. 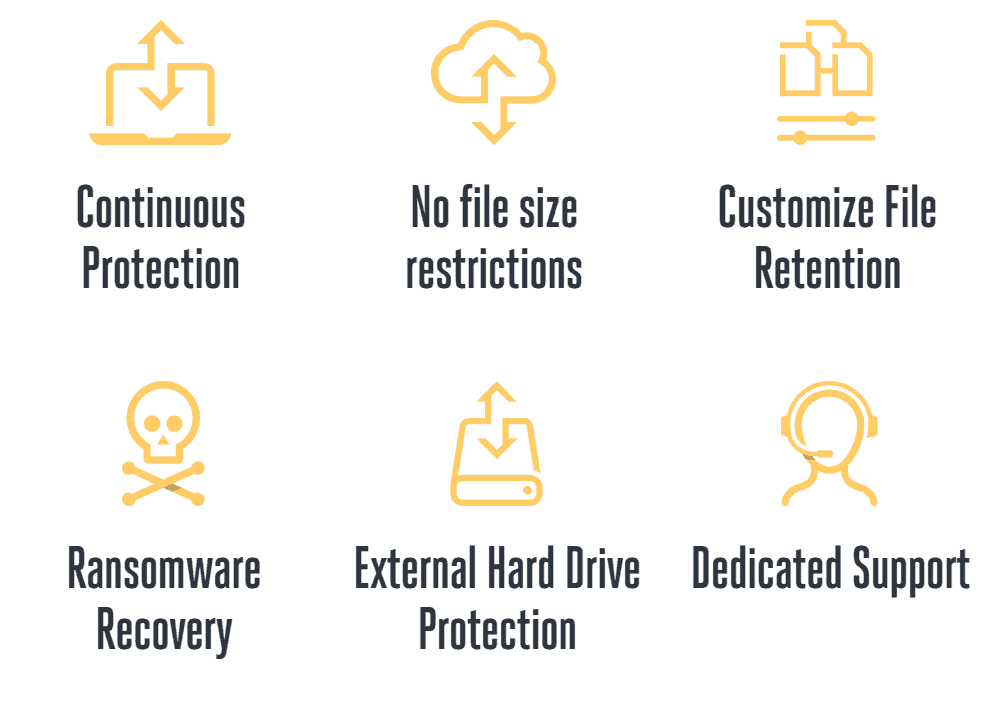 You get unlimited backup space, though your bandwidth is certainly a constraint on how much you can feasibly upload.

Now let’s dig into the actually backup features, which are the heart and soul of the service. Both the free and paid versions do allow you to back up files to external hard drives as well as send backups to other computers and network drives.

The following outlines the main features of their backup service:

Backblaze keeps up with all the features offered by Crashplan pretty darn closely, as you’ll shortly see. But first I’d like to point out that the free version of Backblaze doesn’t provide cloud storage, but does offer local backups to external hard drives (just like Crashplan). 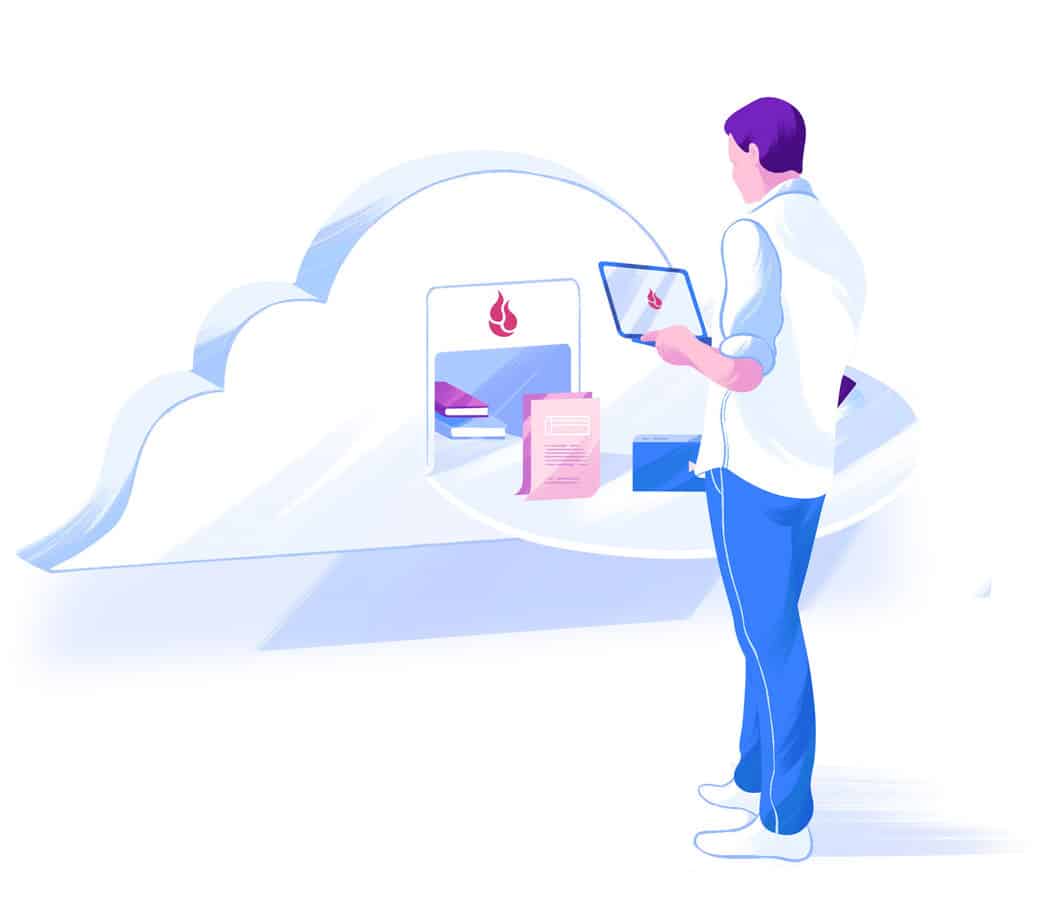 Those features are nearly exactly the same as the backup capabilities of Crashplan. Furthermore, the following lists their restoration features:

The backup and restore features are more or less the same, so let’s talk about what’s different. I thought it was interesting that Backblaze chose to include a feature that locates lost or stolen devices. That type of feature is more commonly found with antivirus software, so kudos to Backblaze.

Also, they don’t have unlimited file versioning. If you’re trying to recover an older version of your file beyond 30 days, you’re out of luck.

And one thing I didn’t like was that they enable automatic bandwidth throttling by default. You can manually set this to conserve bandwidth for web browsing during a backup, but I feel that it’s a bit cumbersome that the software defaults to automatic throttling.

I have to hand it to Crashplan – they have a very robust security system built into their cloud backup service. First of all, there’s a personal password that you need to enter in order to even login to the client.

That’s pretty typical, but things get even better: they offer local encryption! Local encryption, which is sometimes called client-side encryption, is one of the strongest types of encryption for cloud services.

Your data is secured with a user-defined and user-managed private key before it ever leaves your computer. And their local encryption options include a 128-bit key or a much stronger 448-bit Blowfish encryption key.

Since no one else knows your encryption password (after all, you wouldn’t tell anyone what it is, right?), even cloud employees, government agencies, and hackers can’t break into your data.

The downside, however, is that your data is lost forever if you forget your key. Furthermore, your connection to the cloud is secured with SSL encryption to prevent eavesdroppers from spying on your data.

Likewise, Backblaze is extremely secure, and on par with Crashplan’s level of security. If you opt out of local encryption, your data will be encrypted inside an SSL/TLS tunnel as it is in transit to their servers.

Then, once it reaches their storage network, Backblaze applies AES encryption to secure data for long-term archiving. However, you still do have the power to encrypt files locally, which I would highly recommend doing for all sensitive data.

The only downside to local encryption is that it is a resource hog, and can drastically increase the upload times for your files. But that’s just a necessary trade-off. All in all, I think these two providers are almost evenly matched when it comes to their encryption standards.

However, I’d have to say that Crashplan wins by hair, because their local encryption uses longer keys (448-bit Blowfish) as opposed to Backblaze (128-bit-AES). So, it’s time to answer the big question: which provider is better? Phew, this is a really tough call. I liked Crashplan’s features more, especially since they have unlimited file versioning and save data “forever.”

But to play the devil’s advocate, that’s only a nominal feature when considering the big picture. And even though Crashplan has slightly better features, they cost a little bit more, too.

And let’s not forget that both providers are closely matched on the security front, as well. Both offer transport encryption, storage encryption, and local encryption, though Crashplan has stronger encryption due to 448-bit encryption.

They’re really neck and neck, but in my honest opinion, I think one provider is slightly better.

I’d have to say that Crashplan is the victor, but only by a hair – and you may disagree. I couldn’t care less about an extra dollar (or fraction of a dollar) in savings per month. What matters to me is better features (especially the unlimited file versioning) and stronger security.

With that said, Backblaze doesn’t really use weak security (AES-128), but for peace of ming, I’d rather have a 448-bit key.

If you disagree, I certainly understand. This was one of the closer races between two digital services that I’ve seen in a long time.

Heya i am for the first time here. I came across this board and I find It really useful

Good day! This is my first visit to your blog! We are a collection of volunteers and starting a new project in a community in the same niche. Your blog provided us useful information to work on. You have done a marvellous job!